The 8th Annual Mothman Festival was a pleasant (no pun intended) escape from the typical paranormal conventions, conferences and "P-Cons" that are all the rage. Maybe because it was primarily outdoors or maybe that it had a carnival atmosphere, who knows. All I know is that it was a great time for all who gathered on this tiny town along the Ohio river known as Point Pleasant, West Virginia, on September 19th and 20th. 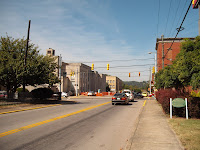 Our journey to this tiny spot of great and tragic history brought us (my wife, father-in-law and myself) from northeast Ohio via Interstate 77, we then traveled down route 2 for about 29 miles which desposited 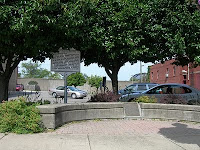 us in Point Pleasant at 6th street (pictured above). It was at this point where the Silver Bridge was formerly located that collapsed on December 15, 1967, killing 46 (not 36 as in the movie The Mothman Prophecies). I knew there was a tiny memorial there as well as bricks with the names of the victims, but I always wondered if there were any remains of the bridge. If you look at the photos of the Silver Bridge Memorial you will see a big wall behind it, I always wondered what the wall was. It's actually a flood wall built to protect the city from floods from the Ohio and Kanawha rivers. The flood walls are actually no longer needed due to dams and other projects a 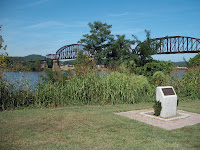 long the river, but are currently being painted with beautiful murals on the side facing the river. On the river side of flood wall is another plaque which stands in the foreground of where the bridge crossed t 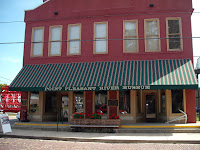 he river (see photo at left, the bridge in the background is a railroad trussel bridge that stood next to the Silver Bridge). There are no remains of the bridge on either side of the river, but the scene itself is eerie enough to feel the history of what happened there. The Point Pleasant River Museum (pictured above right) does have artifacts from the Silver Bridge along with historical pieces of ships and other items from the river's past.

While some of the Mothman stories say the creature and other events associated with it predicted the tragedy of the bridge collapse, it seems that the evidence of science says that it was more than likely age and weight that caused the collapse (not to mention the broken eye-bar due to lack of maintenance and attention). There is also the fact that no mention of Mothman sightings were made for 13 months prior to the bridge collapse.

The festival itself is a celebration of the creature along with the sightings. In the heart of the vendor area was the famed M 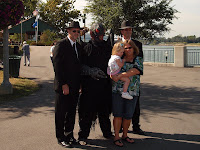 act, each statue is about five feet tall despite Mothman being rumored to be at least 6 feet tall, apparently Mr. Roach is also about five feet tall and refused to use ladders to help create his sculptures). There were also many "characters" walking around, a few various Men in Black as well as the Mothman himself paid a visit (see pic above left).

As I said it was a carnival atmosphere. There were Mothman pancakes (and an eating contest with them as well), lemonade, elephant ears and a variety of other 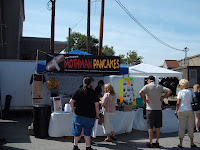 hman Festival Pageant (photo at left). There were also many other street vendors selling everything from t-shirts to handmade crafts (lots of stuffed Mothman dolls) along with some ghost groups (Prodigy Paranormal and Ghosts of Ohio, both of which had guest speakers) present to share their info.

Yes, guest speakers were on hand to talk about various paranormal and supernatural subjects on Saturday and Sunday. I was only in attendance on Saturday and was able to see 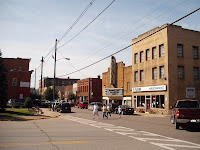 James A. Willis (discussed the "Spooky Side of Abraham Lincoln") and Rosemary Ellen Guiley (Vampires) speak at the State theater (pictured at right in center of photo) on Main Street between sightseeing. There were other guests in attendance, be sure to check out the Official Mothman Festival website for more details.

Curiously missing from the event was any homange to the late John Keel, author of The Mothman Prophecies book that ultimately launched the movie that, well, helped fuel the festival. Keel passed away on July 3 of 2009. Funny thing, a few of the locals I talked to said the movie had nothing to do with the festival. The fact is the first year of the festival (2002) was the same year when the movie was released. The movie was actually shot in Kittanning, Pennsylvania (almost 4 hours away) 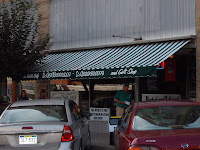 and really put this city back on the map. The site of the Mothman Museum (pictured at left) has some great coverage surrounding the movie and does have a tribute to John Keel on their home page.

There is also a lot of history outside of the Mothman sightings and the Silver Bridge collapse. A long time ago a guy named George Washington visited the area and is rumored to have said (while looking at the point where the Ohio and Kanawha river meet) "What a pleasant point", which lead to the town being called Point Pleasant (well, that's the story the tour guide told). At the corner where the rivers meet there is a huge park, Tu-Endie-Wei (Wynadotte Indian phrase meaning, "the point between two waters") Point Pleasant Battle Monument, with a lot of historical artifacts onsite. The park celebrates the October 10, 1774 battle between Viriginia militiamen, lead by Colonel Andrew Lewis, versus native Indians lead by the Shawnee Chieftan Cornstalk. Cornstalk is sometimes blamed for many of the bad things that 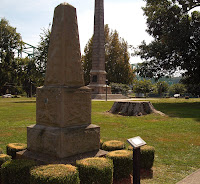 happened in the last 200 years in and around Point Pleasant which is known as the Cornstalk Curse.

(at left is the resting place of 3 teeth and 15 pieces of bone from Chief Cornstalk).

I have to mention one more thing at the festival that was brought to my attention by James Willis, co-author of Weird Ohio along with Loren Coleman and Andrew Henderson. At the end of booths and t-shirt stands, beyond the Mothman st 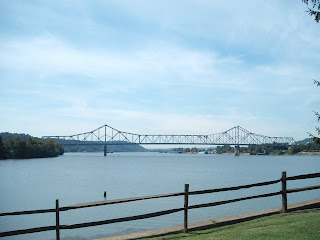 atue was a lone tent nearly closed to peering eyes. Inside the tent was a kiddie pool and a bunch of large snapping turtles and a man from kentucky named Ernie Brown, Jr., the man known as "Turtle Man". He's the Kentucky version of the Crocodile Hunter who crawls into ponds to rid them of large snapping turtles (humanely) for farmers to keep them or their horses from getting bit. Really, I can't make this stuff up.
Posted by Brian D. Parsons at 3:53 PM 2 comments: Links to this post