I decided to derail the subject once again due to a friendly debate I have been having with a colleague over the usage of the First Law of Thermodynamics. You’ve seen this quote a hundred times if you’ve visited paranormal websites or message boards:

“Energy cannot be created nor destroyed, only shifted from one type to another.”

To many this is the proof they need to show others that ghosts indeed exist. Science states that since energy cannot be destroyed when we die the energy has to go somewhere and that somewhere is more than likely as a ghost!!! Yikes. I’ve grown tired of seeing this thought process and the mantra that is passed from group to group without any critical thought as to its real implications. If we follow this thought process a car should continue to run forever without ever needing fuel. Sound silly?

Let’s take a closer look at this First Law of Thermodynamics, which is also known as the “conservation of energy”. The “types” of energy that are referred to within the description of the conservation of energy are more or less potential and kinetic energy. Potential energy could be described as gravitational potential as a car climbs a hill. As it climbs the hill it is actually storing energy (gasoline and engine aside), as it reaches the top and begins to descend the stored up energy is now used. It cannot use more energy than what was stored and will use up all of the potential energy even if it begins to climb another hill (of course, it begins to store more potential). The kinetic energy comes into play as the energy that was stored is now converted into useful energy that propels the car down the other side of the hill without the need of the engine to help. 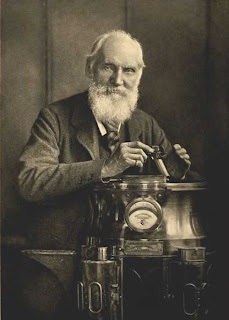 (Pictured at left is William Thomson, A.K.A. Lord Kelvin, who was responsible for most of the intricate work of the laws of thermodynamics)

There are obviously other types of energy (heat, friction, sound, vibration, light, etc.) that this energy is transferred to, but this energy is lost to the environment. Lost? How can it be lost, it can’t be created nor destroyed, right? Exactly, the energy is transferred to something that cannot flow back into kinetic or potential energy, the energy is used but not created or destroyed. Again, with the example of the car, some of the energy is lost due to the friction of the wind and the tires. This energy is being used, but not to push the car forward, instead it is taking away the kinetic energy provided by the engine. So, what the heck does all of this have to do with ghosts? Let’s move on to part two for the answer (and we won’t even get into how this governs heat, which is why it is called thermodynamics). Yes, there are two parts to the Law of Thermodynamics.

The first law states that energy is conserved; the second law would then state that energy always goes from more useful to less useful forms. A car uses gasoline to power the engine. The power created by the engine is not entirely used to push or pull the car forward. There is wind resistance, tire wear and resistance, gravity, dirty oil, and dozens of other things that take away from the engine from being completely efficient. The fuel that is used cannot be used completely, some of the fuel turns to carbon dioxide(and other gasses) and is released into the environment, the burning of the fuel causes heat which is lost energy or energy that is converted into a less useful form.

Within the second law there are also three statements, the first being; “Heat energy always flows spontaneously from hot to cold”. Let’s start talking about ghosts now. If we follow the laws of thermodynamics we should get a spike in heat prior to having a measureable cold spot. It goes against physics to have a spontaneous cold spot appear without there first being heat present (or a measurable form of energy, and no, the EMF detector is not picking up a ghost in transition much to the dismay of many of you reading this). For many ghost groups the third statement of the second law applies, “The amount of disorder in any isolated system cannot decrease with time”. Yeah, I’ve got jokes.

Let’s go back to the second law. Energy goes from useful forms to less useful forms. When the body dies our heart stops. The heart supplies blood and oxygen to our vital areas of our body and also takes away the toxic carbon dioxide out of the blood stream. The heart also gives us our electronic signature as blood creates friction through our body which is composed mostly of water and salt. When our body dies it begins to decompose almost immediately. There are millions of bacteria that live on our skin, in our hair and other places that are part of a symbiotic process that begins to go in their favor when the body dies. To spare you the gross details our bodies are basically reduced to dead tissue and cells. Any electrical signal we have goes out immediately when the heart no longer functions. The brain creates electrical impulses as well, but is completely dependent upon blood for its survival. There is nothing measureable that escapes the body when it becomes nonfunctioning. Yes, for some of you who have done your homework there were experiments done on dying patients where there was an observed decrease in weight as the person died. These experiments were done in less than ideal conditions and the results were not as conclusive as they are stated.

These laws are basic and are deceptively simple in their statements. No laws of science describe ghosts and this is why ghosts are considered paranormal. In order for ghosts to be explained many different laws will need to be amended or rewritten (from thermodynamics to Maxwell’s equations). Even if or when we are able to unlock some of these answers we’ll still have to deal with the Heisenberg Uncertainty Principle (google it for some more mind-opening adventure).

So what’s being done about all of this? There is the occasional shift in thought in our field to various theories within physics (enlightened armchair theorem) that help to explain what might be with ghosts, but does not offer any practical method or explanation about any aspect. When I first came into the field the Chaos Theory was in full bloom, many people know this as the “butterfly effect”, a butterfly flaps it wings in Central Park and this action eventually makes it rain in China. This theory gave birth to the idea that it was just a matter of time until the mysteries of ghosts were unraveled, yet, here we stand at the same point we were then. New theories have presented themselves over the years; a popular one now is the string theory (or really called super symmetric string theory – although there is more than one version). Many are jumping on board with this since there is the inclusion of interdimensional properties (which is also included in other theories). The string theory is nothing more than a mathematical formula designed to answer large scale problems with the four forces of nature on an atomic scale, there is no evidence whatsoever that any of it is accurate which is why it is just a theory. Granted, a couple of other guys named Newton and Einstein had their own theories years ago as well and those turned into laws of nature.

Paranormal investigators should keep a close eye on the advancement of particle physics. The Large Hadron Collider on the border of France and Switzerland has made the headlines in the last few months and will more than likely see more headlines in the near future. It’s been said that the power of this underground collider is so great that it might cause microscopic black holes that could “swallow” the Earth or even create antimatter that would devastate the entire universe (theoretically possible, but highly unlikely). This tool will be used to uncover more secrets about our atomic world, but will also help us understand the possibility of other dimensions and other potential aspects that can bring us closer to real answers about what we see as paranormal. The other half of our concentration should be on the medical world. The brain, or better yet, the mind, is part of the equation when dealing with ghosts. Ghosts are about interaction and it’s more than likely a symbiotic relationship between us that allows for them to be a part of our perception.

Posted by Brian D. Parsons at 9:19 PM No comments: