Are there experts in the paranormal? Part I

This has been a hotly debated topic ever since ghost investigation went mainstream about the time the Internet went full speed just after the mid-1990s. While many people feel that one cannot be an expert in a topic that is not fully understood, or explainable, others readily refer to themselves as experts in either the whole topic of parts thereof (such as an EVP expert).

My goal here is not to settle the debate but to look at both sides of the argument. There is a lot of baggage to unpack on this topic and after writing notes on this for months I realized I couldn't get my thoughts out in just one post. Part I will explore the basics and I'll tackle other related topics as I move forward.
What does it take to become an expert in an area or a field as a whole? Is someone being referred to as an expert really something worth bragging about or being upset by? Are there shadier things to worry about in the ghost field?

More than once in my many years of being a public speaker on a variety of paranormal topics I have been introduced as an expert of some sort without prompt of course. I used to clarify that I did not feel I was an expert, but over time I've just sidestepped the comment and accepted it as an honorable gesture. It seems some get their feathers a bit ruffled when they hear someone refer to themselves as an expert.  Yes, it is a bit concerning when someone jumps into the paranormal and all they really have is having watched a few seasons of a television show as their training. Many of these television trained ghost hunters waste no time in jumping into client cases as well as claiming to be experts in either the whole or parts of the field which is concerning as a reflection to the rest of those involved. 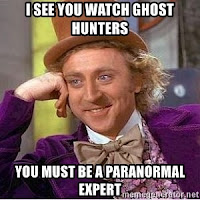 Before we get too carried away let's define an expert. According to Merriam-Webster

"An expert is somebody who has a broad and deep competence in terms of knowledge, skill and experience through practice and education in a particular field. Informally, an expert is someone widely recognized as a reliable source of technique or skill whose faculty for judging or deciding rightly, justly, or wisely is accorded authority and status by peers or the public in a specific well-distinguished domain. An expert, more generally, is a person with extensive knowledge or ability based on research, experience, or occupation and in a particular area of study. Experts are called in for advice on their respective subject, but they do not always agree on the particulars of a field of study."

These definitions don't seem too farfetched for someone to be an "expert" in a particular part of the paranormal such as EVP recording or interviewing or even the field as a whole although less believable due to the number of topics involved. The last part is a notable one, "...but they do not always agree on the particulars of a field of study." Some fields have room for interpretation, and I feel that most aspects of ghosts or other paranormal fields are not clearly defined for just one possibility in most of the aspects involved.
To me, a person's credibility as an "expert" is more believable when there is a heaping helping of skepticism or understanding of how and why the paranormal is defined as a pseudoscience. In addition, acknowledging other fields that can help define or interpret subjective interpretations of various phenomenon adds credibility. For someone to stand up and declare that all orbs (or at least 99% of them) are ghosts and offer minimal skepticism cries true believer, not expert.
This is the line that begins to form where I would argue that no one can be an expert in the highly interpretive world of the paranormal. Is it all ghosts, strange creatures, and aliens, or is is subjective environmental interpretation, misinterpretation, or pure belief fooling people? Can there really be a middle ground on the topic as a so-called expert?
It should be believed that most people in the ghost field over value their knowledge of the field. How could an expert in the field of ghosts not have read a journal from the Society of Psychical Research? How could an expert in the paranormal never have conducted objective research experiments? Most people in the field have not done either one of these and there is far more missing from the arsenal of an expert that most are not doing. But is that just a "paranormal expert" thing?
A cognitive bias known as the Dunning–Kruger effect haunts the general public and the paranormal. According to this principle, people wrongly overestimate their knowledge or ability in a specific area. This tends to occur because a lack of self-awareness prevents them from accurately assessing their own skills. People in the paranormal feel like they have knowledge because they have memorized and rehearsed what others have said based on opinion. This repetition has now made these conjectures into perceived "facts" which are then repeated by newcomers and so on.
There seems to be a large gap between knowledge of ghost investigators and the application of that knowledge. Take into consideration that an overwhelming majority of investigators state that hauntings (residual activity/place memory/repetitive hauntings, etc.) occur far more than intelligent apparitions (intelligent hauntings). However, when these same groups take to the dark to conduct an investigation the first thing they do (after turning on all of their gadgets and stare at the screens) is ask questions. What sense does that make? What's worse is that anything and everything that happens ends up being a ghost. Most ghost investigators claims to be open-minded skeptics but tend to act like true believers once the lights are off. There is even beliefs that some techniques can summon demons such as using a Ouija board. But is it a conduit of the devil or belief? 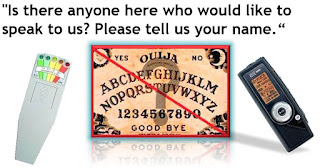 Despite being a children's game and marketed as a parlor trick for decades the cardboard and plastic game has a reputation worse than the devil itself (mainly due to the Catholic church and the movie The Exorcist). However, groups use the same approach as one would with a Ouija board with handheld electronic gadgets without hesitation.
Perhaps I've wandered a bit off topic, but I do feel the paranormal investigation arena has been self-taught for decades and the information gathered is extremely flawed. The big issue is that a true expert would see when something is wrong and correct it. However, in order to be respected one must follow what everyone else does and not veer too far off the path so it seems.
Personally, it doesn't bother me when someone says "expert" as long as they do demonstrate knowledge that is level-headed, coherent, and is not based completely on conjecture along with understanding basic scientific principles that balance out paranormal thought. However, I have heard other words that make my skin crawl.
There are plenty of groups and individuals that advertise themselves as "professional" paranormal investigators or ghost hunters. I would guess they mean they are professional in the way they act and present themselves and not professionals as meaning they are performing work in a profession. Right? Sometimes I wonder what part of the definition they are referring to with being "professionals" and does this mean that other groups are just amateurs? I know, many are, but what really separates one group from another? Size? The amount of tools? Certainly not the matching black shirts or the bad ass poses since everyone does that in the graveyards.
According to Dictionary.com, professional is defined as:

I'm not sure how many weekend ghost hunters or paranormal investigators are getting paid, but that's not something many people think is legit (a topic for another blog post). As far as I know being a paranormal investigator is nothing more than a hobby or pastime, it's not a profession and you cannot get a scientific degree in any topic relating to the paranormal other than parapsychology. Also, another topic for another day is the fact that to be a parapsychologist you have to take masters classes at an accredited university. Online classes that hand out certifications in parapsychology do not make it legit (or legal) for you to call yourself a parapsychologist.
In the definition of both expert and professional we saw words like "training" and "knowledge". Other than watching multiple seasons of television shows how do groups gain their knowledge? Can you get what you need from television, the Internet, and books? In the next part of this blog topic, I'll begin to talk about the next issue that deals with the "experts" and "professionals" which is certification programs. Some people hate them, many groups do them, but are they something that should be allowed to happen? Are they worth getting upset over? Are they worth anything at all?
Posted by Brian D. Parsons at 10:54 PM No comments: