The Rise and Fall of the Loveland Frog

This article originally appeared in the November 2016 edition of Cryptid Culture Magazine.

Every area has their local legends or folkloric stories from crybaby bridges to purported water monsters or sightings of monkeys or monstrous snakes. In the world of cryptozoology there are animals that are reported that were thought to be extinct, animals that are found in areas that they are not supposed to exist, and cryptids that defy logic and biology.  These seemingly impossible creatures have given life to cryptozoology by partnering with the paranormal with tales of creatures that are mysterious and outright bizarre.

Loveland is a small bedroom community with less than 13,000 residents that occupies five square miles of land in southwest Ohio. The city sits about 15 miles to the northeast of the city limits of Cincinnati and has always struggled to form its own identity. The Little Miami River, a tributary that empties into the Ohio River, has always been a large part of the community and sets the scene for the Loveland Frog story that spawned from purported events in 1955. 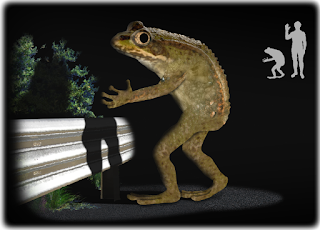 The original Loveland Frog, or Loveland Lizard, story starts off as a “Legend has it” type of story where there are many popular variations that have been passed down over the last 60 years by those in the area. The common elements of the story include a business man who was driving home late one night who saw a few creatures he estimated to be about three to four feet tall. He purportedly described the creatures as having a head like a frog’s and deep wrinkles instead of hair. The man also described seeing one of the creatures holding a wand-like device that purportedly shot sparks from the end of it. The biggest problem with the story is no one is sure of the root of this tale. The man has no name and there is no physical record of any physical report along with no other facts such as just which road this occurred on.

For many this story is just an extension of the folklore surrounding the Shawnahooc, a bipedal reptilian creature described by the Twightwees of the Miami People that occupied this region of the mid-west in the 1840s. The Shawnahooc is also described by the Shawnee yet is folklore and is not described as a real flesh and blood creature but more than likely a metaphor for the fighting spirit of Native Americans. This story could easily be dismissed if it were not for the events that occurred 17 years later.

Friday, March 3, 1972, police officer Ray Shockey was heading back toward Loveland in his patrol car being careful due to icy conditions on the roadway. As his vehicle moved along Riverside Drive near the Little Miami River he saw a creature moving along the side of the road. As his car approached the animal it began to scurry across the roads and became illuminated in the headlights. As the creature reached the guardrail it then stood up on two feet, looked at him, and then crawled over the guardrail toward the river. Shockey described the creature as being three to four feet tall, about 50 to 75 pounds, and being covered by leathery skin. Officers were said to have investigated the area and purportedly noted scratch marks on the guardrail where creature went over, but there is no evidence to substantiate those claims.

Just when things seemed weird enough, fellow Loveland police officer Mark Matthews had his own encounter with a similar creature just two weeks after Shockey’s sighting. Matthews came upon a creature he thought was injured or dead and he intended to move it to the side of the road.  He got out of his car to move it when he said it stood up on its hind legs and hobbled over the guardrail and into the river. Matthews also stated that he fired a shot at it but was unsure if he injured it. Matthews would later change his story in 1999 to local media and in 2001 he was quoted as stating, “It was and is no 'monster'. It was not leathery or had wet matted fur. It was not 3-5 feet tall. It did not stand erect. The animal I saw was obviously some type of lizard that someone had as a pet that either got too large for its aquarium, escaped by accident or they simply got tired of it. It was less than 3 feet in length, ran across the road and was probably blinded by my headlights. It presented no aggressive action.”

Matthews’ admission that his side of the story was a hoax was probably made as an attempt to further separate him from the story. This odd and conflicting admission would help keep the Loveland Frog story alive as this created more mystery behind the modern stories.  The legend lived on happily until 2016 when another sighting opened a few doors and the legend took another dose of reality that may have eliminated what little credibility it had.

Sam Jacobs and his girlfriend were walking along Madeira Road near Lake Isabella in Loveland, Ohio, on August 3, 2016 when they purportedly saw the legendary Loveland Frog.  Sam was doing what just about every teen was doing in early August; playing Pokémon Go. Jacobs captured a quick video as well as some photographs during his evening encounter before leaving the area quickly. His story, video, and photos were in the media the following afternoon. Jacobs was quoted by a few local television stations he sent the story to including WLWT, the local NBC affiliate, “We saw a huge frog near the water," Jacobs wrote in an email to the station. "Not in the game, this was an actual giant frog.” Jacobs and his girlfriend went back to her house immediately after their sighting where his girlfriend’s parents informed them about the legend of the Loveland Frog –or so the story goes.

This new story, and its not so convincing evidence, prompted news services to suddenly take an interest in this story that seemingly had croaked a long time ago. Matthews, who now resides in Florida, gave a telling explanation of what really occurred during 1972 that attempts to tie the story up in a nice bow. He states that Shockey seemed convinced he saw something near the Totes boot factory (now known as Totes Isotoner).
Matthews did see a creature the night he was on patrol, but it didn’t go over the guardrail like reported it went under it. While Matthews had no idea what it was initially he decided to shoot it since he felt no one would believe him. He states that the creature was missing its tail and was half dead. Matthews put the creature, which turned out to be a three foot long iguana, into his trunk to show others what had been seen.

He guessed that the creature was living near the factory’s water pipes that released warm water that was used to cool ovens to stay warm. Being a cold-blooded creature it would have no other way of surviving the cold conditions of an Ohio winter. It was also pretty obvious that this was either an escaped or released pet which went unreported. Matthews told WCPO, "It's a big hoax," and, "There's a logical explanation for everything."

For some the story that Mark Matthews has been pushing since 1999 is total fiction. Some feel that it’s his way of moving away from the ridicule, stories, and the constant contact of people wanting to hear the same story told over and over.  James Renner, author of “It Came from Ohio” interviewed Ray Shockey for his 2012 book at his Loveland home. Shockey, despite telling the author he swore he decided years ago he wouldn’t talk about it anymore, is quoted in the book as saying that it definitely wasn’t an iguana and it was in fact much bigger.

So, which story is true? Did a pair of police officers independently see a three to four foot tall upright walking frog along a river in Ohio? Or did one officer misinterpret an iguana and another provided evidence for a logical conclusion despite the story never being revealed until 1999? When looking at both stories neither one makes much logical sense. The idea of a large upright walking frog is ridiculous. However, it was witnessed by two independent police officers and made a public story. If it was just an iguana why wasn’t this story squashed back in 1972?

What about this latest sighting? My interpretation of the latest Loveland Frog sighting rests squarely between an intentional hoax and a misinterpretation. Granted, if I had to pick one I would say a hoax since the witness went right to the media within 24 hours and pushed his story to the public. There was seemingly no follow-up or any type of investigation into the location of the sighting and the story disappeared as quickly as it jumped into the news. Personally, like many hoaxers, I feel he might have wanted the attention but was shocked by how much this story actually generated and did not pursue it any further. If I had seen this creature I would have returned that night with an array of flashlights, cameras, witnesses, baseball bats, or whatever else I needed to prove that this actually happened. If anything, a daytime trip to the location to look for a logical solution should have occurred before writing a blanket email to the media.

Ohio researcher and author James A. Willis offered his own theory on the latest Loveland Frog sighting. In his blog he states that he wasn’t impressed with the video and images when he first saw them stating that the creature appeared much smaller than three to four feet tall and that the eyes looked like “high beams”. While shopping at a local Big Lots retail store his wife showed him a Wilson & Fisher solar frog which has bright lights for eyes and matches the images closely. Not surprisingly, there is a Big Lots store about 4 miles outside of Loveland. Willis states that he’s not saying this is exactly the explanation, but from what I see he’s done a great job of providing similar photographs that help legitimize a hoax/misinterpretation.

So, while this latest chapter doesn’t look too promising for the Loveland Frog it did put a giant shadow of doubt on the story overall with the Matthews explanation. But, the conflicting information is just enough to keep this story afloat for just a little while longer.

Posted by Brian D. Parsons at 7:52 PM No comments: