I don't normally write a blog for the news but with this week's news I shared a few photographs in the chatroom during the live broadcast on the Paranormal King Radio Network. I thought it would be nice to share these photographs with everyone via the blog instead of just sharing the stories through Facebook and Twitter like usual. Something new, but not sure if I will continue this or not.

I was one of four speakers on October 13 at the Albatwitch Day event in Columbia, Pennsylvania. I had a great time there enjoyed the presentations of local author David Glass, Tim Renner, and Rick Fisher. If you're interested in attending a paranormal conference (ghosts, UFOs, or crytids) then check out my list of events on Paranewsinsider.com.

Last week I covered a story from Chicago where a live alligator was pulled from the waters of Lake Michigan. Well, later on in the week another alligator was discovered but this time nowhere near the Great Lakes. A driver in a town about 20 miles west of Kansas City, Kansas was initially startled when she saw an alligator walk out in front of her car a week ago Monday, October 8th. Deputies had a hard time wrangling the alligator as the four-foot-long reptile lunged at one of them and he pulled his gun. Shots were not fired but the alligator was not captured either. The gator ended up getting back home on its own as it had been an escapee from a nearby residence.

Even more strange is that the same day as this one and not only the one in Chicago, Illinois, but another alligator turned up in Kansas about 20 miles south of the first one. This alligator was about 2 feet long and was found hiding under someone’s car. The city of Olathe, Kansas, where this second alligator was found apparently has a law against owning them so it will be transported to a reptile rescue facility in Kansas. 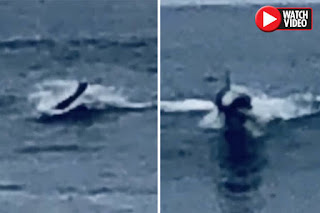 A set of photographs have surfaced of a mysterious creature seen in the Pacific Ocean at Huntington Beach, California. The headline of the Daily Star made this sound like very scary situation as it said, “Mysterious 'human-like' sea creature lurking in water leave beachgoers TERRIFIED. A BIZARRE creature sparked terror on the shores after beachgoers failed to identify what was heading their way.”

Despite the description in many stories saying there is a video there are only a few photographs including one that is just water that were taken back on October 3rd by a man only identified as George. I'm not sure who else was there that was terrified. George states of his encounter, “I was sitting on the sand and saw a frenzy of fish. Water was splashing, and the fish were jumping out – so I went to take a photo and caught this. I've been a surfer all my life and have never seen anything like this before.”

Many people (paranormal researchers especially) assume that just because they can’t explain it that means that no one else can either and therefore it must be paranormal. Within the comments section of the video many claim that they recognize this creature as an orca or as dolphin which is in my best guess as well. I would probably guess this would be a dolphin as an orca’s dorsal fin would be much taller than what we see in the one photograph. But, it sure does look like a dolphin to me!

In the last few years Huntington Beach has had issues with sharks and stingrays chasing fish close to shore causing panic and a few minor injuries and dolphins are frequently seen in the area- and any longtime surfer would know that.

“Mysterious UFOs in shape of white orbs of light 'speed across sky' at South America's highest monument” is the headline that accompanies the latest purported UFO video. The video was shot through observation windows at the Cruz del Tercer Milenio (Third Millennium Cross) which is located in northern Chile and stands about 83 meters high or 272 feet if you’re from North America.

This astounding UFO should have been reported by thousands of people and there should be dozens of videos of this amazing object as hundreds visit this monument daily and the countryside would have been busy with people. But, where are the other videos? 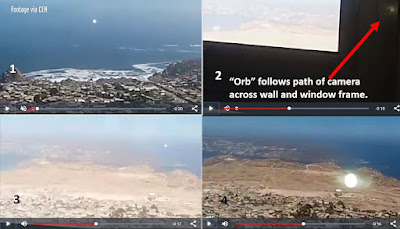 The reason there are no other videos is that this one isn’t really a UFO and it’s not even a good fake. Of the two comments on the Mirror article that I saw earlier this evening both pointed to the fact that this was shot inside behind glass and that there was a light on either the camera of the phone or other device behind the phone. I find it very hard to believe that the person filming this did not realize it at the time.

Some might watch the video and wonder why the first light seen did not move as the camera did in the last shot. Well, the video opens looking out one window from a few feet away from it (1). As the person turns and moves quickly toward the other window you can clearly see the light reflected on the wall (2) and when it appears on the window the light gets closer to the camera (3 then 4) since it’s actually the camera getting closer to the window. Case closed. 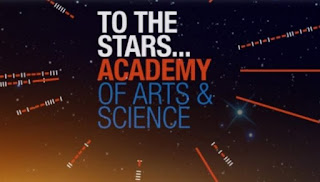 DeLonge fired back via a now removed Instagram post which read in part, “This article is highly misleading and grossly mischaracterizes statements in an SEC filing. Mr. Berger apparently did not EVEN READ the filing in its entirety, and clearly did not understand the excerpt of the SEC filing he quotes.” DeLonge also commented that the writer of the article did not contact him for clarification of the information that was published. He clarified the findings by stating, “The approximate $37 million stockholders’ deficit is NOT DEBT as he characterized it but is attributable to stock-based compensation expense.”

What this essentially means is that the $37.4 Million dollars is not debt as in borrowed money but is a deficit which is basically spending more money that you are taking in. So, unless the TTSA can bring in some more revenue they will certainly be in debt when they eventually have to pay some bills. According to an article in Motherboard.vice.com, “In September 2017, the company began selling $50 million worth of stock to fund its operations, and its website claims to have a total of 2,547 investors. According to the SEC filing, however, To the Stars has only sold a little over $1 million worth of stock to date.” So, no matter how they try to spin this the information is far from positive when it comes to the future of the company. Also mentioned in the article is how DeLonge and others get royalties in excess of $100,000 each no matter what results the company has.

While many view the TTSA as the leader in discovering evidence of UFOs and pushing disclosure to the governments of the world while others see this as nothing more than a money making scheme that has lacked in providing anything credible. Some point to the video that accompanied the Acquisition and Data Analysis of Materials (ADAM) project where it showed team members unwrapping purported pieces of UFOs and other evidence with their bare hands. If this were truly physical evidence of UFOs one would think a company designed for discovery would have taken some sort of precaution. This is symbolic to this latest story and I wonder if this is just the crack in the wall that eventually leads to the collapse of this venture. 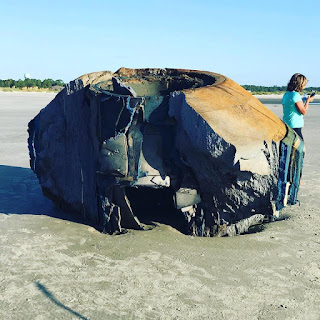 I’m pretty sure there is a logical solution to this, but until then it’s a story about a strange object washed ashore on Seabrook Island in South Carolina. The story has quickly picked up a lot of buzz and has become one of the stronger viral paranormal stories of the year so far.

The large object has been speculated to be everything from a UFO to space junk all the way to just a buoy or some other logical but boring solution. Many websites are focusing on the fact that it was taken away by city officials and some are saying this means it is some sort of alien technology or something else that is a secret.

But, the Lowcountry Marine Mammal Network was the first to report this object and has since allowed hundreds of people to join in the guessing as to what it could possibly be. City officials did take the object away, but it was just due to public safety as well as to identify what it is. It wouldn’t be very good to allow this object to reenter the water and eventually was up somewhere else.

The speculation about what the object might be is all over the place, again from a UFO to even parts from the Space Shuttle Challenger by more than one person. Mysterious, yes, but the object seems to be made of foam and the many guesses as a buoy or other object used to float or protect boats is probably correct. One of the most guessed objects is a pipeline. Strange objects like this wash up on the shore all the time and even in this particular area it is said to be a somewhat consistent thing.

The Paranormal News Insider has been broadcasting since September of 2008 with 372 episodes to date and can be heard live at Paranormalking.com at 8 PM eastern every Tuesday night. The show is also available as a podcast after that on Podbean, iTunes, iHeartRadio, Stitcher, Spreaker, as well as many other podcasting apps and websites as well as on YouTube.

Posted by Brian D. Parsons at 8:17 PM No comments: