We've all heard about alligators in the sewers probably being a myth (we hope so), but what about roaming the streets? On the October 16, 2018 edition of the Paranormal News Insider, episode #372, I covered a story where the previous week saw a kayaker find a live alligator in Waukegan Harbor in Lake Michigan about 40 miles north of Chicago. Unfortunately, or maybe fortunately for the kayaker, the mouth of the alligator had been taped shut. I also talked about two separate findings of alligators on the same day in Kansas City, Kansas of all places. All of these were released into the wild by someone and all three were less than three feet long.

Well, in the middle of June of 2019 we look at the southwestern portion of Pennsylvania, specifically the Pittsburgh area. Back on May 18th a 3-foot-long alligator was discovered at the South Side Riverfront Park, which is along the Monongahela River, locally known as the Mon River.

On June 6th a 5 to 6-foot-long alligator was discovered by a dog walker in a residential area in the Beachview neighborhood just south of downtown Pittsburgh and about three miles southwest of the May 18th discovery. Saturday, June 8th police responded to the 300 block of East Agnew Street in the Carrick neighborhood about two miles southeast of the last sighting and about two miles south of the May 18th find. This latest alligator was just over two feet long. 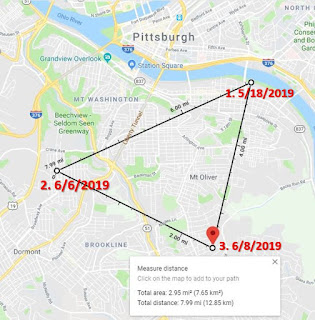 The above part of the story was to run during the June 11th Paranormal News Insider, but I was unable to do the show due to circumstances beyond my control. As it turns out Pittsburgh police had inspected a home after the June 6th incident with the escaped 5-foot-long alligator. The alligator had torn through a screen door and dropped about ten feet to be able to scurry off down the street. On Tuesday, June 11th the home of Mark McGowan was raided, and 32 animals were removed and some of the animals discovered were deceased. Of these animals three were alligators with one having a preexisting neck injury and there were also two Burmese pythons. This begs the question, were these three alligators all related to this home or are there other locations in Pittsburgh harboring alligators?

Alligators discovered in the north are not as uncommon as one might think. “Alligator” Bob Bavirsha of the Chicago Herpetological Society has rescued hundreds of alligators from the Midwest over the years. Obviously, most if not all were either released or escaped.

Alligators are obviously known to live in Florida and southern Georgia, but also range along southern Texas into Mexico, all of Louisiana, and even part of southeast Oklahoma and southwest Arkansas. Alligators also live in the eastern part of South and North Carolina and even live in a swamp area known as the Great Dismal Swamp that extends into Virginia. Yes, Virginia, just south of Norfolk there are alligators. Granted, while prolonged cold can kill them it’s not impossible for them to survive in cold areas for short periods of time and they have even been observed frozen in ice with their snouts out of the water. Granted, the cold severely slows their eating and lowers their energy level.

Cryptozoology is defined as the search for missing or hidden animals. This definition typically hugs the animals known through local folklore and stories and includes animals such as the mermaid, Bigfoot, Loch Ness Monster, Chupacabra, and more but also includes known animal species such as the ivory-billed woodpecker and other animals thought to be extinct. Some cryptozoologists don't consider out of range animals to be a part of cryptozoology due to the fact that people often release them into the wild for a variety of reasons. Take into consideration there are three places in the United States where macaque monkeys roam free (South Carolina, Florida, Texas). They didn't just find there way here as they were purposely let loose.

I don't see these alligator sightings as cryptid findings but just as interesting stories that are strange and scary. People enjoy the thrill of investigating a place with a ghost, but how about stumbling upon a five-foot-long alligator while walking your dog in the northeast?

Posted by Brian D. Parsons at 3:54 PM No comments: Links to this post