Are We Ruining Ghost Hunting Sites?

I had an interesting conversation with a gentleman who is part of a fairly well known location that is a hub for paranormal investigators and ghost hunters during a speaking engagement at a library in Grafton, Ohio this October. We were discussing plans on my group possibly coming out to the location to investigate particular aspects of the environment (humidity and other factors) during the colder months of the year when the conversation shifted toward something that I had often thought of; are ghost hunting and paranormal investigation groups ruining the famous places they like to investigate? No, not by running around in the dark screaming or by vandalizing, but by just being there. 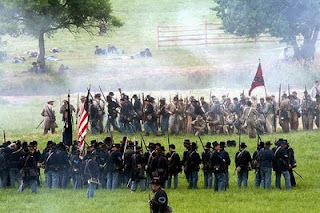 We can all agree (hopefully) that hauntings are basically an "imprint" of emotion on a location caused by a sudden death or extreme circumstances during life in that particular location. With the high adrenalin flowing during an investigation, as well as the act of trying desparately to communicate, are ghost hunters imprinting over top of the tragic events? Is the activity going on at these locations potentially adding to the evidence gathered later on by other investigators?

I've been fortunate to listen to actor/archaeologist/cultural anthropologist John Sabol speak earlier this year at the Ohio Paranormal Convention in Dayton, Ohio. John refers to himself as a "ghost excavator" as he says he attempts to "peel back the layers" of a haunting. He feels passionately that ghost hunters are indeed scarring these locations by their attempts at discovery by leaving their impressions on the environment and potentially covering up what is really there. John uses a system that allows himself to become part of the haunting environment itself so that he can connect to a ghost or a haunting experience. This is an interesting system that he states is way more effective than the way that ghost hunters and paranormal investigators investigate a location. Although a good paranormal investigation group should be recreating the scene which is part of what John does. To get a little more detail on his process, please see my review of the 2009 Ohio Paranormal Convention.

Personally, at first I thought John was a bit too intense and was pushing his way of doing things on other people. In all honesty it really hit me a few days after listening to him speak that I realized he was right and that I should adapt a little more of what he does to what we do.

When ghost hunters or paranormal investigators attempt to interact with a ghost or record haunting phenomena they tend to do it on their terms. In other words, they are using todays technology to attempt to interact with ghosts or hauntings that have been around a long time. While the technology we have at our disposal is the best yet, is it the right thing to use to connect to a 148 year old confederate soldier?

While the tech is useful for documentaion I think we need to rethink the overall approach by really trying to interact on the level of the haunting, or the ghost, on their terms more than ours. If we can get them to relate to us or have them think we are someone they know or reenact something familiar we would probably get a better reaction than by asking it to "talk to the red light on the recorder" or other methods of 21st Century communications.

Granted, this should not be left to investigating Civil War sites, but could also be applied to abandoned hospitals or prisons as well as the house down the street that has a ghost or is haunted. Is it possible that the constant influx of thrill seekers at historical sites will ruin it for future investigators? Who knows for sure, but it seems logical that continous emotional imprints can not be conducive for obtaining good evidence of haunting phenomena at historical locations.

So, what methods are getting the best results? Have particular locations noticed a change in the type of evidence gathered? I have not been able to find an answer as of yet, but hopefully as the amateur paranormal investigation movement evolves people will move away from behind the safety and security of their tools and realize the potential of communication on the interaction level beyond what is normally used.

As far as ruining sites for future investigators I feel it is a legitimate concern. The high intensity of emotions that accompany an investigation that are repeated over and over are bad enough. If you then realize that there is potential for some investigators to affect the environment by their beliefs and possibly leaving psychokinetic "residue" attached to the environment for future investigators to read with their instruments. As many stumble around in the dark in search of their proof there are many of us also who are in search of answers surrounding the effect of our culture on the paranormal itself.
Posted by Brian D. Parsons at 1:48 PM No comments: