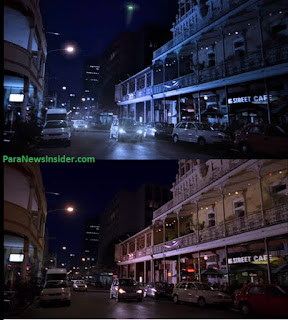 Posted by Brian D. Parsons at 3:56 PM No comments:

In September of 2008 the Paranormal News Insider made its debut with a 6:29 segment heard during the (then monthly) Grand Dark Conspiracy. I had been the first guest earlier that spring and had been invited back to help steer the show away from the ghost guests that had started the show for the first few months. Dan Bautz, the host, and I had talked about a paranormal news segment and it didn't take long until it was born. Dan gave me full autonomy to create the show as I saw fit and I wanted to keep it ten or less minutes.

As the show went weekly in September of 2010 I was nervous that I wasn't sure if I could even get enough content to do a ten minute segment, but everything turned out fine and I did over a year's worth of shows without missing a week. There came a break in the show every now and again and ultimately in May of 2015 the Darkest Hours Late Night (the Grand Dark Conspiracy's Friday night show name that took main billing for the show as a whole starting in early 2015) turned off its mic for the last time as of this writing.

I had contemplated doing my own stand alone show since a break in the show the year before, but knowing we were close to getting on terrestrial radio on an AM channel in Marysville, Ohio kept me glued to that show. After the hiatus in May the show was supposed to start back up in mid-July, but never did. After a few weeks of weighing my options I prepared to go live. My beloved dog, Sasha, passed away in late August and I really did not feel much like doing paranormal radio let alone much else. At the same time I felt like I needed a distraction from things and I did not want to wait too long to get a show started. I had picked a great network and was forced to get an early time slot due to a new shift I was working at my job. I have enjoyed the first nine weeks of the hour long live show and there are only a few things I wish I could do different, but I highly enjoy what I do.

In talking with a few other show hosts I have heard that paranormal radio shows are slowly dying out. I think part of the problem is there are too many out there that share the same format. When this happens in regular radio the stations always struggle. The good news is the Paranormal News Insider is a rather unique format especially for what I bring to the table. I am not concerned about ratings, hits, or even sponsorship (but it would be great to have some paying sponsors!). But I have thought about how I miss producing my own shows with musical intros and backgrounds along with sound effects which the live show currently can not allow me to do. I had also thought about how some listeners state they do not like the longer two hour shows which is why I went after an hour format (I felt like 30 minutes might not be enough time).

On November 17, 2015 the WCJV Digital Broadcasting network had some computer issues which prevented me from having a live show that night. I was bummed and also worried that I would not be able to provide a show for the second time in a month (I did put on a Halloween special since the network had a scheduled down week for upgrades). I had quickly agreed to come on the following Tuesday to do two hours in which I will do back-to-back episodes. I had also thought about just recording an episode from my material for the 17th no matter the length of time. It dawned on me then that maybe it was time to test the new format I had thought of. A stand alone segment that was five minutes or less and essentially a summary of the hour long live show; a condensed version missing a lot of the detail and insight. Let's face it, many people don't have an hour to hear about five or six paranormal news stories no matter what valuable information is there. Others who work in the field may not need or want to hear all of those details so a quick and condensed version of the show might just take off. The other idea I had with the show would be to license the Xpress segment to other paranormal (or even non-paranormal) shows with the idea that it could help my show grow.

Like I said before, I don't care much about ratings. But, it would behoove of me to try and make my show the best it can be in content and in being as widespread as I can possibly make it. This latest segment idea is just one way I feel I might be able to help make the show grow.

Check out the first Paranormal News Insider Xpress episode: The episode, like all the new ones, is available through Podbean. With Podbean you can download their app for Apple or Google products and listen to the show on the go. If you do like the short format, please let me know!
Posted by Brian D. Parsons at 8:31 PM No comments: