Cougar and Cubs Spotted in Tennessee!(?)

WGNS Radio out of Murfreesboro, Tennessee, posted a story on their webpage on September 4, 2017, that stated a man caught video of a cougar and cubs in Tennessee. While this might not sound like a big deal it would actually be something that has not been documented east of the Mississippi River in almost 100 years. 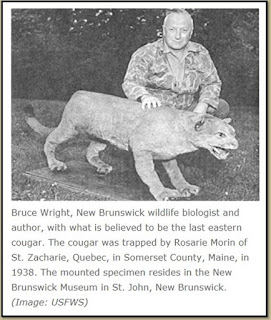 Mountain lions, known as cougar, catamount, puma, panthers, and nearly 300 other local and regional names in North and South America, have been officially listed as extinct since March 2, 2011, after a four year review among 21 eastern states. The last known cougar in the eastern United States is thought to have been shot in Maine in 1938 (taxidermied and show at left years later with Bruce Wright). Granted, this cougar was categorized as a separate species from the number of other groups of cougar including that of the Florida Panther and western cougar. Technically, according to some who dispute the eastern cougar as a distinct species, the cougar was extirpated from the eastern states and regulated to the mountains of California, Oregon, Washington, and British Columbia in North America while still having a large roaming area of South America.

In the 1990s there began to be rumors and reports of cougar sightings although rumors had persisted since the 1940s despite the cougar never being officially documented. Eastern states laughed at these reports and declared that no mountain lions existed east of the Mississippi River. If ones were sighted they were either escaped exotic pets, ones that were let loose on purpose, or were just misidentification of a house cat. 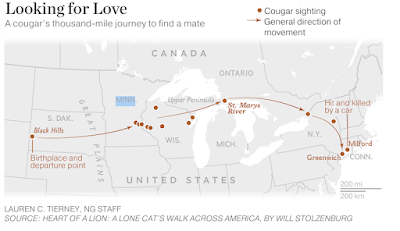 Over the years the evidence became clear. On June 11, 2011, just three months after the eastern cougar was declared extinct, a mountain lion was struck and killed by an SUV on the Wilbur Cross Parkway in Milford, Connecticut. This was less than 80 miles northeast of New York City. Granted, this was not an eastern cougar but a wandering male from the Black Hills region of South Dakota. This is the largest eastern concentration of cougars other than the small number that exist in south Florida. Numerous other states have reluctantly provided photograph, video, and physical evidence that mountain lions are wandering through states east of the Mississippi River.

The main point here is that despite a seemingly slow and triumphant comeback the cougars discovered in the east are wandering males from the west, again primarily from the Black Hills region. If this latest report from Tennessee were true it would be a huge victory for big cat lovers and huge headache for state wildlife management teams that do not seem to want to deal with having these ambush predators in their states.

This sighting was in the form of a video that was shot by Jim Kutz who lives in a KOA Campground in Lebanon, Tennessee. Mr. Kutz claims to have found evidence of mountain lions and set up a trail cam to hopefully capture evidence of them. He also states that he has been a trapper of game for quite a while and has trapped bobcat, coyote, fox, and other animals and these cats seem much larger than bobcat.

However, when watching the video it is apparent to me (and many others it seems) that these are in fact NOT cougars but are definitely bobcat despite the claims of Mr. Kutz. The cats in the video have ears that have a white stripe in the center. Mountain lions, including cubs, have solid colored backs of their ears which is generally dark brown. Another telltale sign is that bobcats have very short tails especially to that of a cougar. In the video it is clear that the tails of the cubs is far less than the size of its leg and bobcats (named for their short tail) have a tail that only grows about six inches long. A cougar on the other hand will have a tail that is about three feet long and will generally measure 2/3 the length of its head and body. The image in this paragraph shows two black and white photos taken directly from the video and shows the ears and body structure of a bobcat and cougar for comparison.

It is also apparent to me that despite Jim's background with trapping he's not very good at identifying these creatures on film. It's also apparent that Scott Walker, the person from WGNS who interviewed Mr. Kutz is not as knowledgeable about animals as he tries to be during the interview. Cougars do not grow to 800 pounds (try 220 pounds with males), they are not constantly traveling (especially with cubs), and they are not exclusively "night animals" as they are not just nocturnal but also crepuscular (active at dawn/dusk) and can also be observed during the day.
Posted by Brian D. Parsons at 6:57 PM No comments: