Second Edition for "Handbook for the Amateur Cryptozoologist"

My fifth book, "Handbook for the Amateur Cryptozoologist", was published in February of 2014. Since then, the book has been recognized in the July/August 2014 edition of "Skeptical Inquirer Magazine" in the New and Notable Section as a positive book review. At the end of the year it was again recognized as one of the The Best Cryptozoology Books of 2014 by renown cryptozoologist Loren Coleman. He labeled the book as "The Best Guidebook for The Cryptozoologist-In-Training of 2014." It was a huge honor to be recognized by a living legend of the field of cryptozoology for my work. It was also a huge honor to be reviewed by a skeptical organization and given a virtual "thumbs up" for a book that offered a balanced view on a controversial subject. 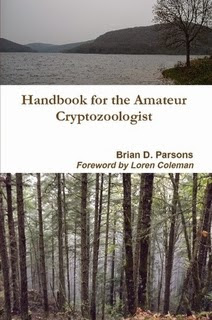 After Loren Coleman contacted me for a review copy, a few weeks later he let me in on the fact that the book would make his year end list. Loren also wanted to sell this book at his International Cryptozoology Museum that is located in Portland, Maine. He was also curious to know if I was interested in including a preface to the book supplied by him. Earlier in the year I had made some revisions to the book in order for it to be included in an online school (name withheld due to not being completed at this time) and knew of a few other changes I wanted to make. I had never considered having someone write a preface, or rather a foreword by definition, for one of my books, but if I was for this book it would be no one other than Loren. So, in March of 2015 I re-released the book as a second edition. It is still only available at my personal online bookstore at Lulu Press and will be available at Amazon and other online retailers soon as the first edition is still available.


Interestingly, this book was a lot of work but I really did it for fun as it was a "diversion" of sorts away from my ghost handbooks and my work on the "E4" Method that included several on-site client investigations and months of research prior to that. This book was a lot of fun to write and I felt like it connected to me more of a person as I used my past to talk about concepts of the book. My other books were successful in their own right and I enjoyed my "tour" with the "E4" Method book that included conferences in Maryland, Virginia, and several appearances in Ohio and Pennsylvania not to mention numerous podcast interviews which was still a lot of work. Offers to review the "Handbook for the Amateur Cryptozoologist" seemed to come to me with little effort (there are more to come) and I had never thought of this book as one that would generate as much interest as it has so far. Every project I work on I attempt to expand my knowledge or experience with something, and while this book is still "self published" I am still proud of what it provides and I feel this is my best writing and overall book to date.


The “Handbook for the Amateur Cryptozoologist” explores the history and mystery behind some of the most elusive creatures found - and some that are still hidden. The handbook provides a well-balanced look at many concepts necessary to conduct proper client-based investigations. Cryptozoology has been shadowed under the umbrella of pseudoscience due to a myriad of problems. This book takes a skeptical, yet balanced, stance to help the newcomer or seasoned veteran gain solid footing into using a more scientific approach to the field. It will also arm you with the basic abilities necessary to become a successful researcher and field investigator in the field of cryptozoology. It explores the use of technology in the field as well as the methodologies behind investigations and expeditions that go beyond the television style of thrill-seeking. This handbook will be your basic guide to becoming a responsible and rational investigator in a field wrought with hoaxes and misinterpretations.

This book is available now at my personal bookstore at Lulu Press.

Posted by Brian D. Parsons at 4:35 PM No comments: Links to this post