I have been a part of paranormal conferences and conventions for years, but have made little effort trying to get into many of them in the last few years. This year, however, I was very fortunate to have been a speaker at the Butler Paranormal Convention in Butler, Pennsylvania as well as the Pennsylvania Bigfoot Camping Adventure within the past month. The Butler Paranormal Convention is in its 9th year and is presented by Brian and Terri Seech of the Center for Unexplained Events. The event took place back on April 16, 2016.

The event had Stan Gordon, Brett McGinnis, Ronald Murphy (Dogman), Thomas White (haunted roads of Western PA), as well as the host of the Paranormal News Insider Brian D. Parsons (balanced look at cryptozoology). Karyn Dolan was scheduled to speak, but she was unavailable due to sickness and Thomas White stepped in and did a fantastic job. This event is always well attended and beyond the speakers there were numerous paranormal and cryptid groups represented many years of investigation and research. This event is definitely one you don't want to miss in the future if you enjoy learning from very seasoned investigators/researchers while just mingling at the tables.

The Pennsylvania Bigfoot Camping Adventure (May 6-8, 2016) was an idea created by Eric Altman. Eric is an excellent researcher and investigator of Bigfoot phenomenon who has branched out into other areas and is also the long time host of the Beyond the Edge radio show. His idea was to bring people together in a campground to hear speakers, experience workshops, and then take part in various expeditions being lead by experienced researchers. While it seems simple it has never been done on the east coast nor anywhere else that I am aware of. The event took place at Benner's Meadow Run Campgrounds in Farmington, Pennsylvania. This area is near Chestnut Ridge which is synonymous with Bigfoot and UFO sightings over the course of decades.

The event was wet from rain during Friday, but a night hike turned into an interesting sighting by researcher and speaker Steve Kulls the "Squatch Detective" as he got an interesting find on his thermal camera (his team later determined it to be a bear). I stayed at the camp ground to take a group out that included a few kids. I let them do "howls" and "woops", answered their questions as well as
gave them some advice on tracking and other things.

The event on Saturday was held under a warm sun that helped curbed the cold morning and wet grounds. After an introduction to the program I was the first speaker doing a variation of my "Balanced Look at Cryptozoology" program. Steve Kulls was up next with a very deep look at Bigfoot with quite a bit of science and a level head. Also up was Dave Dragosin and then Stan Gordon. The speaker's lineup was mysteriously perfect, there was my presentation that discussed what cryptozoology was about with the others filling in the gaps and Stan Gordon finishing it off with his never ending research of cases that were peppered all around the area we were in. The event also had workshops that discussed some necessary tenets of field work. Of course the big hit of the weekend was having "Trapper" John R. Tice from the television show "Mountain Monsters". Tice was a HUGE draw for the kids and while I'm not a fan of the show John is a very down to Earth guy and really brought a nice dynamic to the event.

Saturday night we headed out again for another expedition. There was still a large group heading out to a location near state game lands as well as a group staying behind at the camp grounds. The group at the camp grounds turned out to be a lot larger than we had anticipated, but we did the best we could leading them out on a trail that was just too small to support the 60 plus people that wanted to be involved. We hung out until around 11 PM when a storm began rolling in. It was a fantastic time and despite the muddy conditions I heard nothing but positive raves about the weekend. The event also had singer Walter Shrum who's song "Searching for Bigfoot" (watch highlight video below) had everyone singing the words "Bigfoot, Sasquatch, back in the woods, Bigfoot, Yeti, in your neighborhood!" It was also great to meet a lot of new people, those I only knew through social media, those I don't normally get to see or have not seen in a while. It was great catching up with Butch Witkowski as well as meeting ParaNexus member Anthony Holmes, meeting Kenny Biddle and hanging out with Jay Bachochin (who drove all the way from Wisconsin to attend) on Sunday afternoon just prior to leaving and of course the many other people I forgot to mention. 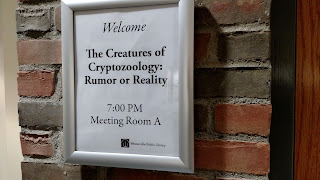 For me, I had one more event which I just concluded Thursday night at the Westerville Public Library just northeast of Columbus, Ohio. I did yet another variation of my "Balanced Look at Cryptozoology" program with the subtitle "Rumor or Reality" which explored legends in Ohio in addition to the basics program. This marks my eighth consecutive year at the library and I will return again in the fall for a ghost program.

Check out this awesome YouTube video created by Jay Bachocin from Chum Bucket Studios about the Pennsylvania Bigfoot Camping Adventure (and check out Walter Shrum's music!).
Posted by Brian D. Parsons at 12:07 AM No comments: Links to this post