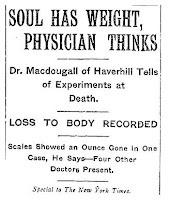 This is what a headline read of the New York Times on March 11, 1907. Dr. Duncan MacDougall from Haverhill, Massachusetts, had placed barely living subjects on a bed which constantly weighed them as they slipped into death. MacDougall felt that the soul was material and had mass, therefore it could be measured.


His first of six human subjects died and immediately lost three-fourths of an ounce, which is 21.3 grams. MacDougall’s experiments and findings were also published in the American Medicine journal as well as the Journal of the American Society for Psychical Research. This experiment has lead to the belief that the soul does indeed weigh 21 grams and that the body will drop weight upon death. The former statement is folklore and the latter is true, yet not from the departure of the life force.

What about the other five bodies MacDougall experimented with? Two results were discarded due to the scale not being adjusted in time as the patient died quickly. Two showed an immediate loss in weight followed by more weight loss as time went by and one showed an immediate loss in weight with no further change. One showed a loss followed by gain and subsequent loss again. MacDougall’s results were questionable at best and a public debate ensued with other professionals through the New York Times and other articles. 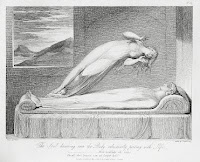 The biggest scientific error was the basic methods used. MacDougall and his colleagues involved in the experiment had a difficult time in determining the exact moment of death. Obviously the sample size was not large enough to come up with a distinct number, the belief of 21 grams is based upon the folkloric belief that perpetuated after this experiment was deemed inaccurate by the scientific community- but others still believed it was real. The equipment used to weigh the subjects was precise, albeit unreliable. The subjects were placed on a bed which was affixed to a giant scale that could weigh the individual with an accuracy of within 5 grams. The scale required constant adjustment and the experiment needed constant observation of the body to determine loss due to sweat (no mention of gaseous loss, not sure why they did not use an enclosure) and other potential issues. Overall the experiment was a poor example of the scientific method from beginning, as MacDougall displayed scientific bias alone by already determining he knew what would happen, to end with the equipment issues and small sample size.

Dr. MacDougall did try other similar experiments with dogs and found no loss in weight at the time of death. This, he felt, gave credence to his experiments with humans as he thought dogs had no soul. He again made headlines in 1911 as he was experimenting with x-ray photography during the death process and MacDougall claimed to have seen the soul leaving the body when he observed “a strong ray of pure light”. He went on to perform other experiments in order to prove the soul existed and left the body at death, but he himself died in 1920.