I was invited along as a guest to the spring outing of the Pennsylvania Bigfoot Society lead by Eric Altman. The expedition would include around 30 extra participants (free event, but we paid our own expenses) who served as observers, researchers, trackers, and witnesses during the two day search for signs of Bigfoot and puma. The core of the PBS was there to facilitate the event and make sure that we all got what we came for.

I arrived at the Keystone State Park area on Friday, May 17 at around 2 P.M. in the warm spring sun. I pulled into site #73 at the hillside campground area that was about ¼ mile from the lake. I chose this site as it was only two sites away from the site of Eric Altman which served as the main base for the weekend. I quickly set up my small 6’X6’ tent, set up my day pack, checked my recording devices one last time and grabbed a quick snack before heading over to start the excursion. We were briefed as to what to expect, what we were doing, where we were going, and introduced ourselves to the rest of the group. We were then free to explore Keystone State Park and grab dinner before heading out on the first night excursion.

Keystone State Park is a 1,200 acre park in Westmoreland County near Derry Township in southwest Pennsylvania, about 40 minutes east of Pittsburgh. The centerpiece of the park is the 78 acre manmade lake (Keystone Lake) that was built in the early 1900’s for use in the production of Coke (not the drink) which is partially burned coal used to produce steel. The land was purchased by the state of Pennsylvania in 1945, but a mine close to the property lasted until 1953. The campground I was sleeping in was resting just above a catacomb of mines that were dug underneath it from the nearby hillside where an old cave entrance was sealed off. The area itself is chocked full of Bigfoot and UFO sightings and is only 16 miles from Kecksburg where a famous potential UFO crash incident took place in 1965.

Our first part of the expedition would take us out of the park into the surrounding area just west of the Allegheny Mountains. I joined up with group of guys that drove up a mountainous area to meet up with another group along a dirt road about a mile from the closest home. The two teams decided to split up and our team headed up a dirt road to a high point in the area where we would spend the next few hours. The guys I was with had never done any type of investigation and I quickly found myself as the one that was looked up to as the “lead” of sorts.

The PBS member that came with the other group decided to stay behind along the road with the other group, but we were tethered together with a walkie talkie. I set up digital recorders along the road (which was along private property, so we could only use the road) to the southwest, northeast, as well as one a hundred feet out along a hillside away from where we stationed ourselves.

A Bigfoot “hunt”, “Squatch Watch”, or whatever you want to call it, is very similar to a ghost hunt where there is a lot of sitting, waiting, and a bit of interaction with the environment. We heard plenty of owls, saw some deer, but never heard anything else that night. At around 12:30 A.M. we were asked by the other group to come back down and I retrieved my recorders, packed up my chair and the four of us made our way back to the road full of disappointment, but still excited about that we had staked out the area and would have two more chances.

One thing about camping in a tent is that you really come to realize just how early the sun comes up and how even earlier it becomes really light outside. For me, I was out in the open and I was exposed to the light. Luckily, I had brought a sleep mask which gave me about an extra hour and a half of rest before the birds and the campground began to make enough noise. We met at 10:30 A.M. at the main camp and were given our direction to conduct hikes in various areas. I joined a different group of people, including Ghost Hunter’s International’s Rosalyn Bown. The six of us went to the same location I had been at the night before, but drove about 1/8 of a mile west and hiked down the opposite side of the road. We saw plenty of scat, more than likely from coyote, but nothing else out of the ordinary. It turned out to be a two mile hike through the woods culminating with another mile walking up the dirt road in a tiring finish; literally walking up the dirt road toward the top of the hill the entire way. We stopped at a small local bar on the way back to the campground, but not being a big drinker as well as knowing I was probably already dehydrated from hiking all day, I sat and had water. Rosalyn and I talked some shop and sipped our waters; it was a great end to the first part of Saturday.

Saturday night brought on an interesting excursion; Eric had all 30 plus attendees in addition to his team going to the same location. We drove in a convoy for the majority of the way before stopping along a dirt road. The road back to the investigation site was rocky and flooded in many spots. The only way in was either to hike or bus us in via 4X4s. We chose the latter and took two pickup trucks back about a half mile and then walked back another ¼ mile to a central meeting point. One group would stay at that spot while other groups would fan out to general areas in specific directions. I went with a guy named Joe who had not worked with PBS in a while, but certainly knew his stuff. We walked back about another ½ mile or so and set up our own minicamp with our chairs.

I decided to continue to hike down one of the paths to see what was south of us. The sun was set and it was beginning to get dark out, but I had yet to bust out any of my flashlights. As had been the habit I scanned the ground as I walked while glancing into the surrounding area for movement. My eye noticed a dark patch of dirt surrounded by old leaves which I scanned for tracks but found none. A few feet further I noticed another smaller spot of dirt that resembled the shape of a foot. I laughed to myself for thinking it was a footprint, but I as I knelt down and felt around I noticed a slight heel impression as well as potential toes. I was a little excited, but I fought to control any excitement as I figured it was merely Pareidolia or wishful thinking. I rushed back to the site to get Joe and the group to come down and take a look. We searched for prints ahead of and behind it, but found none. He was optimistic that it could have been a track, but was obviously old. We both concluded that it was inconclusive, but it was still a thrilling moment to find something that just might have been. 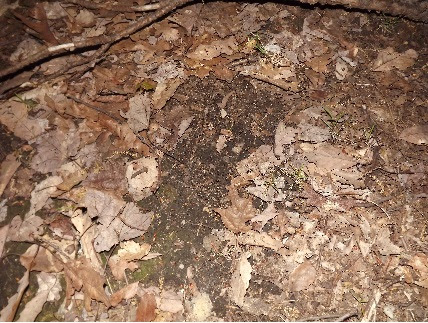 As the night settled in each group took turns call blasting. Joe demonstrated the various yells and whoops he used and we listened for responses. Other groups used recorded baby sounds, wood knocking as well as various calls. At one point we heard a quick succession of knocks from behind us just as Joe gave off a whoop. We all knew it was not a woodpecker and another group had heard it as well. It was again inconclusive evidence, but again it was an exciting moment. Overall I was impressed with how the groups communicated with each other and how the weekend was run. While it was just a random search for Bigfoot and big cat evidence we all had a fantastic time. Even though cryptozoology offers tangible evidence I realize just how elusive physical evidence can be as nature has a way of hiding its secrets. The Pennsylvania Bigfoot Society will conduct a fall expedition October 4-6, 2013 in a location to be determined.