Ouija Board: Conduit of the Devil or Belief? 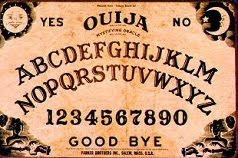 "Is there anyone here who would like to speak to us? Please tell us your name."

A common first line to many who take the adventure of playing with a Ouija board. First of all, Ouija is a registered trademark of Parker Brothers, a subsidiary of Hasbro, and it's a board game made of plastic and wood. So, what's the fuss?

Many people claim to have had strange and evil things happen while or after using a Ouija board, many groups an

d individuals (paranormal groups and ghost investigators alike) are against anyone using these devices (much to the dismay of Parker Brothers) since they are "dangerous" and "unpredictable" in how they operate.

(Above left: Sign similar to that which many paranormal groups put on their website despite possibly never dealing directly with a Ouija board or even anyone else who has.)

Christian-based organizations teach that Ouija boards are inherently evil and are the conduit for demons and the Devil, any Earth-bound "ghost" could just be a guise for the Devil himself (party poopers). Many "regular" people claim to have had bad experiences derived from using a Ouija board; including ghosts following them everywhere, poltergeist-like activity, possession and other unpleasant activity. So, why does Parker Brothers continue to sell this game if it is so bad?

There exists a logical explanation behind what makes a Ouija board work, or rather, how the planchette (plastic piece you place your fingers on) moves. It's called the ideomotor effect and basically your fingers move the planchette without you really realizing it. You may ask or hear a question and then your fingers move to an answer that seems appropriate all without you thinking about moving to that location. Yep, it's been proven scientifically. So, does this explain all of the accounts of people using Ouija boards? What about all of those people experiencing ghosts and poltergeists and stuff?

This is where the belief part comes in. Who's to say there wasn't a ghost there all along? Maybe the subject's sudden open-mindedness caused them to finally interact, OK, maybe that's a stretch, but it's possible for some cases. Maybe they just believed so hard or were scared witless that every little creak caused them to think a ghost was responsible (jumping to conclusions is a recognizable part of being a ghost investigator- we see it a lot!).

A famous research project from the Toronto Society for Psychical Research proves that they actually "created" poltergeist-like activity in 1972 which ended up tipping a table numerous times, the activity was caused by those involved because of their belief in what was going to happen (See Phillip). Regardless of the events that occur, and if they are really paranormal, is it really the fault of the board? Very doubtful and most people realize it's the people and the way they practice that are responsible.

A major explanation many paranormal investigators give against the use of this board is that they can "open" doorways to uncontrolled spirits, ghosts or other malevolent beings. Asking random ghosts can invite terror that can not be controlled without a psychic.

Let's take another approach into consideration. A ghost group is in a home investigating after thorough interviewing (not just "where did ya see it?, Cool, lights out boys!") and they begin to set up their equipment. They go into the master bedroom and pull out a Ouija board and ask, "Is there anyone here who would like to speak to us? Please tell us your name." Heck no, that's bad! I can hear and feel everyone cringing at the thought. If they continue this approach the family (and even the investigators themselves) can be inundated with evil spirits that can make things much worse, right? OK, so, the board isn't the right tool. Let's have them use an EMF detector and a digital recorder, that's better...

"Is there anyone here who would like to speak to us? Please tell us your name."

Hmm, notice anything familiar? The approach used by a Ouija Board and the "scientific" tools are really the same, does it really matter if you call out "Bob" or just for anyone? Why would an electronic tool be any different than a piece of cardboard? The tools measure the environment and can tell us when ghosts are present you say. I say the tools do measure the environment, which is in constant flux and can be unpredictable and not every unexplained blip is paranormal. A fancy light on your EMF

detector does not mean a ghost is present, granted, a EVP at the same time would make a great argument.

The point is, why is it OK to use these tools and not a Ouija Board when you are essentially doing the same thing?

Measurement? OK, nice comeback, but how good are your controls? Did you thoroughly measure the environment with mulitple EMF detectors in the same environment you are investigating in? Fine, the Ouija Board doesn't look cool and yes, it does carry with it the negative connotation and sense of careless pursuit versus fancy lights and expensive gadgetry. Who's fault is that? Why

are ghost investigators continuously perpetuating this perception to the public when our methods are the modern day verion of this old game and tool?

(At left: An electronic Ouija Board invented in 2008)

Many paranormal investigators claim to have open minds, but they seem to only be open to their own beliefs (actually something that happens in every field in science, so don't take it personally!). We feel safe with out tools since they come with an on/off switch and a manual, but why do we fear tools that have been used for centuries without any real examples of terror? This is only one example of many that we deal with in the field of paranormal investigation (similar to believing in the full/new moon effect and solar activity despite no documentation, so why do almost all groups display this information? Yes, myself included; I document these and lots of other information for all of my cases, not just when I investigate but when the client experiences events as well and eventually this work will be published, not here, but in a scientific journal).

In a forthcoming blog I will explore the effects of belief in the ghost field in closer detail with some suprsing scientific evidence.