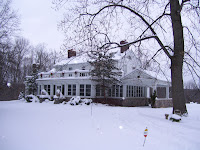 We (Ohio Paranormal Investigation Network) conducted our first formal investigation of Farnam Manor in Richfield, Ohio on March 6, 2010. Our hopes were high as we had collected some great EVPs while just touring the building a couple of weeks prior. We had collected numerous personal stories from the owners, Tim and Kathy, and were excited to investigate this inviting old building in detail. Our focus was also to collect investigation evidence for our presentation at the Farnam Manor Spirit Tour, which was a fundraiser for the Farnam Foundation to help raise some money and awareness for this historical building. 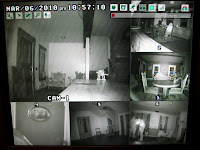 The investigation began slowly as we had to wait for the owners to get us into the building as they had thought we would be there on a different day. We ended up conducting our team meeting in our Equipment Manager's truck while waiting. A few of us were a bit hungry and we decided to send out one of our investigators for food. Even though the Cleveland Cavaliers, Barnum and Bailey Circus, and many hundreds of concerts used to take place less than five miles from this location there are few places to eat, especially fast food nearby. The Cleveland Coliseum was once located on route 303 and Interstate 271 in between the cities of Cleveland and Akron just down the street from where we sat. It was torn down in 1999 and is now just a field returned back to nature.
Once we got into the location we began to haul in all of our pelican and other cases, spools of video wire, extension cords, body bag (yes, we have a bag large enough for a body), and all of our other needed equipment for documentation purposes. We decided to set up shop in the center area of the building, which was the main dining room area. Not too much had been documented there, other than a seance that was conducted there about two years prior. After getting much of our cameras set up and wires run we realized this location was bad because of the sound that was created in this room was heard all over the house (which is very wide open inside to begin with).
We spent a lot of time making sure everything was ready before we began our actual investigation and really didn't start until 9 P.M. We conducted five separate EVP based vigils with the various investigators as well as the owners, who we wanted to have involved since they are already "part of the environment". Bob, our equipment manager, was armed with his laptop which had EVP maker installed and running. We had four separate digital recorders placed near a few of our infra red cameras. I carried a digital recorder to monitor the events as they happened and I used two others to conduct various attempts at capturing EVP in various parts of the house. We had a command center person who watched our 6 IR shots continuously while taking notes on internal and external noises and walkie talkie traffic.
We were very optimistic that we would walk away with something that we would be able to show to the crowd that would be gathering at the Manor later that month. After spending several days reviewing my three digital recorders I found nothing. We also found nothing on our video surveillance, as well as all of the other digital recorders we had set up throughout the location. We were a bit surprised, but understood that we more than likely brought out too much technology at once. In future investigations we promised to break out the equipment piece by piece. We will also put our command center off to the side of the Manor near the entry way which will keep the tech out of the majority of the home and may help allow the spirts to be seen. 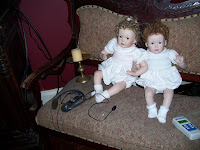 At our private investigation/fund raiser on March 27 we used seven IR cameras, yet fewer digital recorders (due to the extra investigators that attended the event creating noise). We were suprised to see a curtain moving upstiars. One of our investigators was outside on her phone and saw the drapes move apart. She quickly came inside and discovered no one had been upstairs at the time. We had noted movement from another set of curtains in that room, which we quickly discovered was from the heat vents. The one in question is also close to vents, but we observed the drapes as the heat went full blast and they didn't move a whisker. We have this on video and will be reviewing it as time allows. We also caputed some potential EVPs during our group vigils, but the contamination possibility was high.
We are also going to conduct some mini vigils during the day with two investigators. Our sensitive/pyschic Erica has already spent time alone this week collecting audio and we will soon up the ante with more recorders as well as video to capture the whole EVP collection experience.

Below is the video presentation we put together for showing at the Farnam Manor Spirit Tour showcasing our first investigation of the Manor:
Posted by Brian D. Parsons at 8:13 PM 1 comment: