Are there really small hairless creatures killing people in India or is the truth too much to bear?

A viral story was let loose on December 1, 2016 by a Facebook user from India. Along with an accompanying photograph and video it was suggested that a creature was eating animals as well as people along the state borders of Kerala and Karnataka in India. Not only that, but this creature in the the cage was just one of four that have been seen. The post to date has been shared over 260,000 times and has spread virally just as designed. 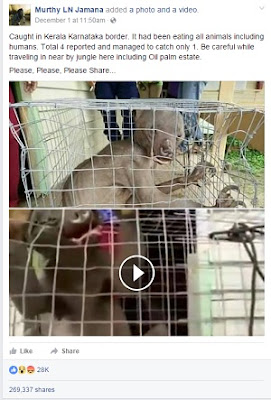 However, is it true that there is some scary monster or even an alien on the loose? Wait, who said anything about an alien? The truth is the photo and video are based on a real animal that made a scary entrance in January of 2015. The creature was seen by workers at a Malaysian Palm oil plantation. The workers filmed the creature making a very slow getaway and it obviously didn't look very nimble or capable of killing a person. It was initially described as potentially being an alien, but those in the area were quick to realize that it was a hairless, and obviously sick, sun bear. It took a team from the Sarawak Forestry Corporation a couple of months to track down the animal and capture it and their hope was to help this obviously sick animal.

The sun bear initially responded to food and fluids, but within a few days began to withdraw from food and water. Every effort was made to save this animal from intravenously administering fluids to placing a feeding tube into its stomach, but in reality the bear was beyond sick. Sadly, the creature died on May 18th of 2015. An autopsy revealed that the sun bear was very old and was in the late stages of cancer. 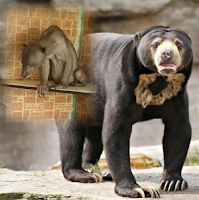 Sun bears live in the tropical rain forests of mainland southeast Asia as well as the islands of Sumatra and Borneo in Indonesia. Their habitat has been slowly destroyed and the numbers have dwindled in reaction to this as well as with commercial poaching.  The International Union for Conservation of Nature (IUCN) lists the sun bear as a threatened species as it is considered vulnerable which is one step away from endangered.