It was utter chaos in Santiago, Chile on December 22nd, 2015 as a pair of videos demonstrates. The two videos showed up on YouTube and the speculation in the UFO world went wild. The first one, seen at right, created a big buzz throughout the media and UFO and paranormal bloggers alike as everyone weighed in on what they thought was going on.Was this an invasion of several alien craft? No. The simple fact is this event happens every year. Similar videos have also popped up ever since 2003. The reason for this yearly occurrence is these lights in the sky are actually T-35 pillar propeller driven  aircraft used by the Chilean Air Force. What we are seeing is the end of the graduation ceremony where the two-seater craft are flown over the skies of Santiago.


Despite this simple explanation many still argue that the planes don't seem to look or fly normal and they are not buying it. Granted, there are others who have picked up on posts from others who have seen this story in the past and have provided the answer. Just with a quick search of YouTube you can find plenty of videos that document these sighting year-to-year. Many of the titles will even have "T-35" in the title, for obvious reasons. The big giveaway is the fact that you can easily see strobe lights on every single one of the crafts. 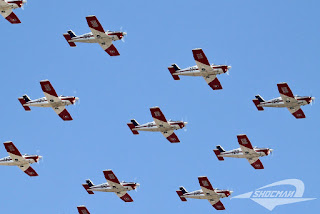 The T-35 is a trainer aircraft used by Chile and is a two-seater turboprop driven plane. The videos would not pick up the sounds of the aircraft due to the distance between the witness and the craft. Even then, these are small planes with propellers so they are not really that loud (see the video of the parade from 2010). It's hard to believe that the locals would not be used to seeing these aircraft flying over city, but certainly a tight formation would not occur that often especially in the evening.