Kitwe "Man in the Sky" busted

We all knew this was fake, but the news story has been quickly sweeping its way across social media. A giant human-like "thing" was seen over the skies of the Makuba Mall in Kitwe, Zambia, in south central Africa recently. It purportedly panicked many and made some flee and others pray, according to the story. 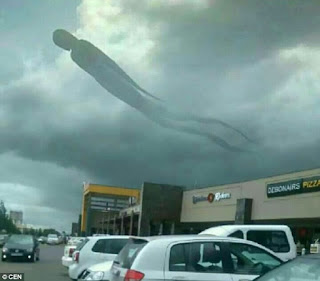 Oddly, the major source for this story, which has been copied and pasted in many languages in many websites, blogs, and fake news sites all over the world, is the Daily Mail. Tracing back this story I was able to find the Facebook page called "Zambian Watch" that posted the story back on March 1, 2017 with the exact information stated in the Daily Mail article. I read through the comments and found very little of value except for the mention of the Dineo cyclone which lead me to a story where a purported mermaid washed ashore. The image of the mermaid was actually from the set of the 2011 film Pirates of the Caribbean: On Stranger Tides and was created by makeup and special effects artist Joel Harlow. The series of images of this mermaid have been all over the Internet since. Next to the mermaid was the photograph of the "flying man" that was supposed to represent Dineo as some sort of monster.

The image used of the "flying man" used along with the mermaid was a bit clearer than that of what was seen in the image of the Kitwe "creature". Using this as a guide I simply Google image searched and found the exact image on Pinterest of a “Spirit Man” kite manufactured by Martin Lester out of the United Kingdom. 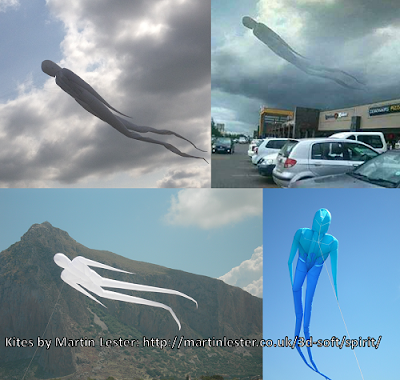